Baby, me and a cold cup of tea

My musings and thoughts on life as a first time mummy, its ups and downs and all our adventures along the way.

I figure after telling you about our journey to pregnancy – the next logical story to tell is that of Rory’s birth. I won’t spare you any details, but I’ll try not to be too graphic!

Rory decided to make his arrival unexpectedly at 36+5. I’d always assumed that I would end up going two weeks overdue and would have a large baby. I don’t know why I thought this but I was sure he wasn’t coming early and that I had at least another three weeks to get everything in order. More to the point another three weeks of hefting my huge bump around and rocking the pregnancy waddle. However, clearly Rory had other ideas and he planned to arrive in style.

On the morning of 6th August I woke up at around quarter to 6 desperate for a wee, having slept reasonably well and only having to get up a couple of times in the night. I decided I couldn’t hold it any longer and headed off to the bathroom. After relieving myself, I felt a strange thud inside me which made me wince with pain. Immediately I started getting pain in my back which was coming and going in waves and making my eyes water with each blast of pain. As there had been nothing to suggest labour was on its way and I still had over three weeks to go, I assumed this was Braxton Hicks and decided that I’d never cope with real labour if this was just the practise pain! After half an hour or so of this on/off pain I started to worry that something was wrong and thought I’d time a few of them just to see how far apart they were, I think inside I probably knew I was going in to labour but I was definitely in denial. I kept telling my partner that I was fine and that he should carry on getting ready for work and not to worry about me. He was rather reluctant to leave me but I convinced him by saying I’d ring the hospital later if it carried on. However, I was soon begging him to stay when, as I stood up to say goodbye to him at 8, my waters broke. My cries suddenly changed to ‘Oh god this is real, you can’t leave me!’ I got on the phone to the hospital and after a very stilted conversation, as I breathed through the contractions that were now coming much more frequently and were rapidly increasing in intensity, they suggested I make my way to the hospital as soon as I could.

I would say this is the point at which my dignity probably deserted me! Having waddled to the toilet, leaving the door wide open, I sat down thinking I’d just go for a wee and then I’d get dressed, grab my bags, which were luckily packed and ready to go in the nursery, and we could head off. Little did I know that once sat on the toilet – I would find it near impossible to stand back up again in between contractions and that I would instead sit on the toilet, huffing and puffing, whilst shouting instructions at my partner as he ran back and forth gathering bags and bits of pieces I needed him to add to them. When he had collected everything we needed and loaded it in to the car, I couldn’t avoid getting off the toilet any longer – I just about managed to throw a pair of trousers and a top on in between contractions and headed for the door. Gone were all the images in my head of arriving at the hospital feeling calm and collected, wearing nice clothes and having done my make up. I looked rough as anything and I genuinely didn’t care, it almost felt like I was having an out of body experience!

Now when I say headed to the door, I forgot to mention that we live in a second floor apartment, and therefore heading to the door actually meant there were two sets of stairs to tackle before I had a chance of getting to the car. I was now having about a 30 second break at most in between contractions and so it took a about 3 or 4 contractions to make it down the stairs and another 2 just to heave myself in to the car. I reclined the car seat, closed my eyes and did my absolute best to put into practise this breathing I’d been told about!

Upon arrival at the hospital at about 9.15, we dumped the car and I started the waddle in to hospital with my partner following behind looking like a donkey with the number of bags he was carrying. Unfortunately, we had planned to have Rory at the midwife led unit, but due to his early arrival we had been told to go to the consultant unit instead and we had no idea how to get there. Luckily, a very kind receptionist offered to take us up as neither myself or my partner could take in the directions she was giving and I was struggling to walk more than 10 steps before having to stop again! So the three of us headed in the direction of the lift, only to be shouted at by the lift’s automatic voice when we stepped inside, telling us to leave the lift as it was out of order. After attempting the stairs it soon became apparent that I wasn’t going to make it up them, so the receptionist dashed off for a wheelchair and whisked me off to the service lift with my partner running along behind trailing bags.

When we eventually made it to the ward I was put in to a room and, whilst my partner went to move the car and ring my mum to tell her to get herself to hospital ASAP, the midwife came to examine me. Imagine my shock and , if I’m honest, sheer terror when she told me I was already 9 and a half cm and if I carried on like this I would have a baby by midday. It was the weirdest feeling of excitement combined with shock and disbelief – how was this baby coming now? Despite having everything ‘ready’ for weeks – I suddenly didn’t feel ready at all! I hadn’t tidied the apartment, I’d never made it back to mothercare to buy that extra cellular blanket. This was real and was happening so much quicker than I’d ever imagined!!!

My partner arrived back and was told to prepare himself and my mum crashed into the room not long after from what I can remember. I had been passed the gas and air by this point and was feeling somewhat dazed. It wasn’t long before I felt the need to push and the midwife confirmed baby was on his way. She did give me a warning at this point – saying no matter what you see on one born every minute, it is most definitely not just a few pushes and then your little one is here. She was right; pushing seemed to go on forever and I felt like I was getting nowhere and crowning and delivering his head just brought a whole new meaning to the word pain!! After puffing through the appearance of his head I was told to take a breath and prepare to deliver his body. Rory clearly heard this and decided he wasn’t waiting for me to put in the effort and slithered his way out, much to the shock of the midwife who just about caught him as he launched himself across the bed at 11.15 exactly.

And that was that, our life was changed forever in the space of 5 hours! 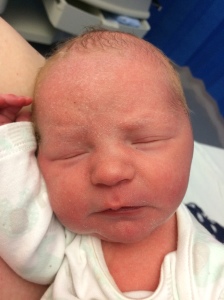