Baby, me and a cold cup of tea

My musings and thoughts on life as a first time mummy, its ups and downs and all our adventures along the way.

When you become a mum for the first time, you are thrown in to this completely strange and unknown world. All the way through pregnancy you are blasted with information and prepared for labour, but once baby is born it’s up to you to make your own journey as a mum. Apart from the occasional visit from a health visitor, advice from friends which can be sporadic and of varying degrees of helpfulness and the often outdated opinions from older relatives, you pretty much have to go your it alone and work out your own way of being a mum! 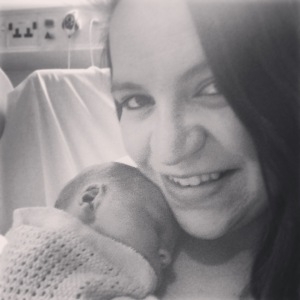 There are so many things about being a mum that have taken me by surprise, from that insane rush of love the moment I first held Rory to the sudden floods of tears for no apparent reason!! But today I thought I’d share with you just a few of the many things I now do as a mother which I find amusing or have taken me most by surprise.

That I would let random ladies feel my boobs.

OK so not completely random ladies and it was for a reason! When Rory was born I really struggled with feeding him. I had always had a very open approach to breastfeeding – if I was able to great but if not then I wasn’t too bothered, I was formula fed and I’ve turned out just fine (some may disagree with this point). However, after having Rory I needed to stay in hospital and with the midwives help I gave feeding my best go!

Initially, there appeared to be absolutely zilch happening, nothing was appearing from my boobs and there was definitely no signs of the holy grail that is colostrum! Whether it’s because Rory arrived early and my body just wasn’t ready or it just liked being difficult, I really don’t know. Having read up on breastfeeding more since I do wonder whether it’s because Rory was away from me and in an incubator for so much of that initial day or two that we couldn’t just lie doing skin to skin to encourage my milk to come in. Anyway, this is where the onslaught of boob feeling began. One lovely midwife explained to me how with some gentle boob massage and squeezing in the right places they could try and encourage the colostrum and hand express it in to a syringe to feed to the little man. Now, although it felt very strange to be sat there with a HCA squeezing my boobs this way and that way, milking me like a cow, all the while making polite conversation – it did the job and within a day my milk had DEFINITELY come in. Rory was still unable to feed properly and pretty damn quickly I became horrendously engorged – it was pretty blooming uncomfortable to be honest. Bring on some more boob feeling, this time it involved a midwife coming in every time I fed Rory to try different techniques to help me out. These included holding white gloves full of ice to the boob I wasn’t feeding from, massaging them before each feed and placing warm compresses on them. When the engorgement finally began to ease, my boobs continued to be checked at least twice a day, with further midwives copping a feel to help with using the machine to express and to encourage Rory to latch properly.

Before my week in hospital was up my boobs had been felt, prodded and poked by at least 10 different people – to the point that I almost started getting them out whenever there was a knock on the door!!

The photo above is one of many attempts to try and feed Rory while we were in hospital.

We got Netflix a week or so before Rory arrived, the plan was to make the most of the free month and sit down and watch some films together in the evening. Great plan, had Rory arrived on time. As it was I think we managed to watch one film before he arrived. Little did I know that Netflix would really come in to its own after Rory arrived. I can’t even remember now who was to blame, but someone decided to mention how amazing ‘Pretty Little Liars’ was to me. During one mammoth newborn sleep session (those were the days) I was flicking through Netflix and saw it and thought I’d give the first episode a go. The first episode was swiftly followed by the second, third and fourth and before I knew it, during every sleep or feed, I was sneaking in another episode desperate to know what happened next. I was genuinely gutted when I got to the end (yes, yes, I know I need to sort myself out). Apart from watching all of ‘The OC’ while I was at uni, I’ve never really been one for binge watching series, but it appears I am a changed girl. Since finishing ‘Pretty Little Liars’ I have also made my way through ‘Orange is the New Black’ and something else with love in the title (clearly that one was a goodun…). Any suggestions for what to start on next are very welcome!

That I would begin timing my showers by episodes of Peppa Pig.

I was one of those people – one of those pregnant ladies who said “My child won’t watch telly, they won’t become addicted to some brightly coloured, repetitive programme that I can’t stand!” I was wrong! So very wrong! Peppa Pig is my saviour.
I have tried a couple of different methods for a successful shower time when there is just the two of us in, bringing a playmat through into the bathroom, trying to put him down at nap time and throwing myself in there before he wakes up to name just two. However, by far the most successful method that works for us is waiting until about half an hour after his first morning bottle (any sooner and you’re risking it coming back up), putting him in his jumperoo and popping Peppa Pig on the telly! This works well as long as I’m not too leisurely in the shower, i usually have two episodes worth to get showered and then a third episode to get out and dressed! Any longer and it’s risking a screaming fit! The moment I hear the end titles of that second episode, I know I need to get a move on or I’ll be stuck with hair drying in a tangled mess and potentially be wearing towels for a good chunk of the day!

That I would regularly talk about myself in the 3rd person

That I would go for days without straightening my hair

Before Rory arrived I would wash, dry and straighten my hair everyday without fail. It was dyed on a regular basis and even if I was going to put it up I would still run the straighteners through it. Nowadays I just about manage to wash my hair every other day and survive on a mixture of mum buns and dry shampoo. It is dyed for a special occasion (if I have time) and it rarely sees my hairdryer or straighteners. We got back from Wales at least three weeks ago and before I went out the other day I had a genuine panic that I’d left my straighteners there as I couldn’t find them anywhere, only to realise that I’d put the holdall away with the straighteners still inside. Before having Rory I had visions of losing my baby weight (and more) straight away, doing my make up and hair everyday, choosing amazing outfits and generally just personifying yummy mummy! I believe the word that sums me up is naive, massively naive!!

That I would never ever finish a book again unless it was aimed at the under 5s.

Story time with Rory is a daily occurrence, but reading a book for myself has become distinctly less successful. It’s not that I don’t try, in fact when I was in hospital I successfully finished two books as Rory was fast asleep in the incubator and I had nothing to do. Since leaving hospital I have started 3 or 4 books and failed miserably to finish them all. I start one, I read a few chapters, I come back to it a few weeks later and have to start again as I’ve forgotten everything I’ve read and repeat this process numerous times!!

There are sooo many more but there’s a few to get started with!